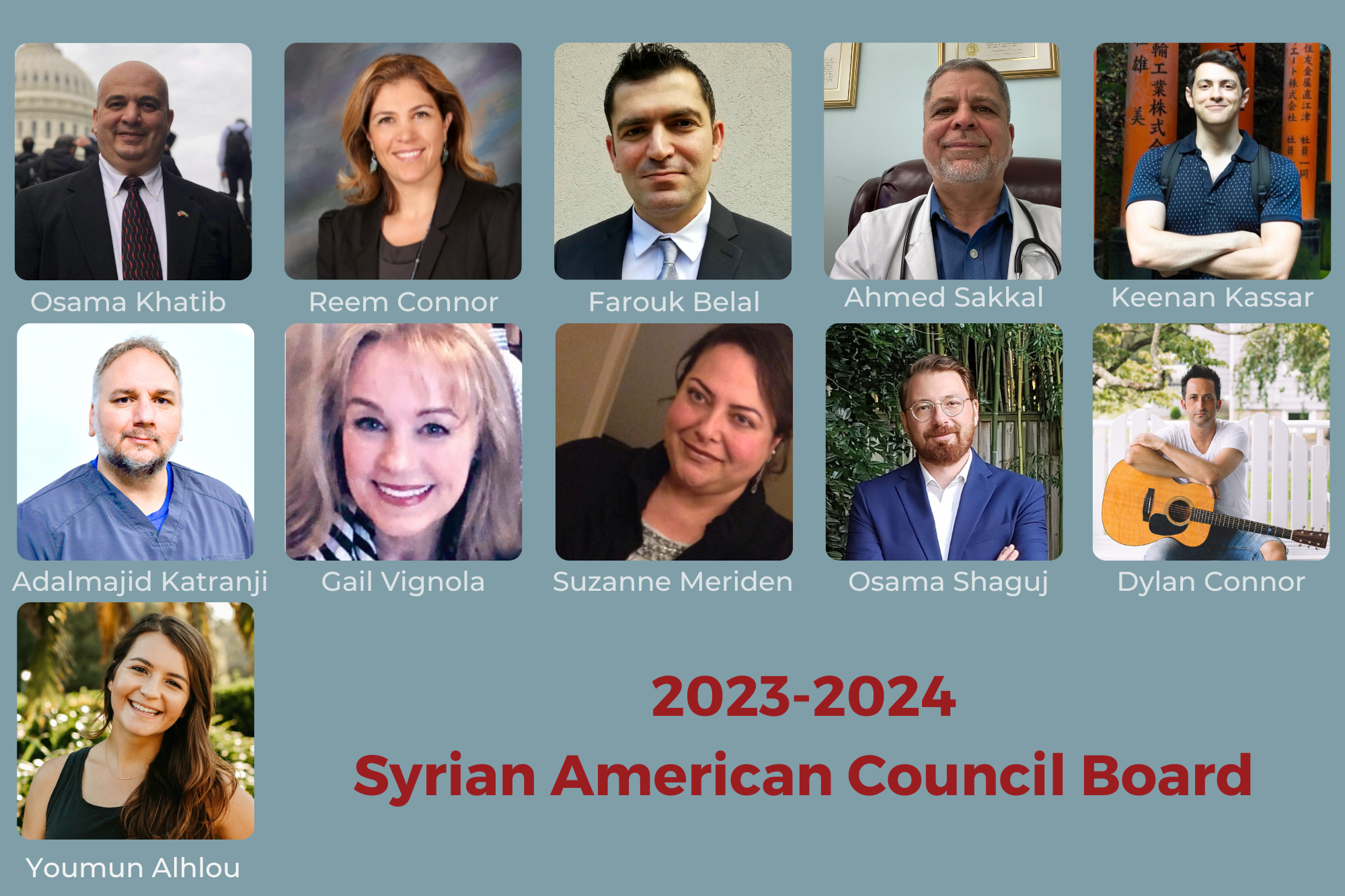 Farouk Belal is a Syrian-American activist and community organizer. Farouk left Syria in 2000 to pursue his Bachelor’s in Biology at Istanbul University, Turkey. He moved to the U.S. in 2006 and pursued a BS in Business Administration at Phoenix University. Farouk joined the Syrian revolution from its beginning. He worked with a wide network of global activists to establish the Syrian Solidarity Movement. He also served as the Chairman of Committees organizing the Revolution Anniversary events in DC. Farouk is the Co-Founder of the Syrian Cultural House and led the SyriaFest project in Washington DC.

At the community organizing level, Farouk worked closely with key community members to engage, mobilize, and empower the Syrian American community in the DMV area. He resides in Fall Church, Virginia.

Osama Khatib is an active member of the Syrian American community in Massachusetts.  He has been involved in organizing several events that advocate and support the Syrian people’s plight for freedom and democracy.  He is an active Board Member of the Syrian American Council. Osama is engaged with groups in his local hometown supporting Diversity. He also helped settle Syrian refugees in the Boston area. Osama came to the US in 1983.   He currently resides in Swampscott, MA with his wife of 30 years and their three children.

Keenan is a second-generation Syrian American. Both his parents are from Damascus, which he visited every other year before 2011. He has worked in the finance industry for eight years and received his MBA from the University of Chicago. Since joining the Syrian American Council, he co-founded the Masks 4 Idlib campaign which delivered over 32,000 made-in-Idlib cotton masks to refugees in northern Syria during the peak of the pandemic. He is passionate about the free Syrian cause and looks forward to further opportunities to help the community. He resides near Chicago, Illinois.

Gail Vignola is an instructor and director of second-language writing for the English Department of Seton Hall University. Her BFA is from Virginia Commonwealth U. and her post-graduate work in education/applied linguistics was at Barry University/Miami, the U. of Massachusetts/Boston, and the U. of California/Berkeley. Gail is a committed activist on behalf of the Syrian revolution and started a nonprofit—Scholars for Syria—in 2015 to increase awareness, promote advocacy, and raise funds for UE’s 23 Syrian students. She received a 2016/2017 Global Scholar Award for this initiative. In 2017, Scholars for Syria was granted the UE Student Organization of the Year and the Diversity Award for their advocacy work and for the Social Awareness course that sent Syrian students into local schools to form cultural alliances and dispel negative rhetoric about the conflict and Syrian culture. In 2019, Scholars for Syria was awarded the Heiskell Award for Higher Education in Emergencies from the International Institute of Education (IIE) in recognition of their successful strategies for supporting students displaced due to violence and political persecution. Since 2019, Gail has served on the board of VIP.fund/edSeed, a Syrian-run nonprofit serving youth impacted by conflict through e-learning, crowdfunding for education, and entrepreneurship.

Suzanne Meriden was the most recent executive director of the Syrian American Council. In her role, Suzanne advocated the U.S. government to drive U.S.-Syria policy and support those on the ground in Syria, as well as worked with members of the international community. Suzanne maintains near-constant communication with Syrians inside Syria to bring their stories to U.S. and international government representatives, as well as the general public.

In addition to her government and policy work, Suzanne sees one of her principal functions as connecting people to one another. She travels around the country, meeting with Syrian American communities nationwide, listening to them and their concerns, as well as updating the community on the Syrian American Council’s work and ongoing advocacy, and the situation on the ground. She believes it is her duty to instill in community members their responsibility for civic engagement.

Prior to her work at the Syrian American Council, Suzanne held multiple corporate operations management positions with reputable U.S. retail companies, but after the start of the Syrian Revolution, she left that career to work on the Syrian cause. She is fluent in Arabic, English, and French and near-fluent in Turkish. She holds a bachelor’s degree in International Business from California State University.

Youmun Alhlou Horta is a native Californian, a Manager at Meta, and a proud Syrian American. As the daughter of two very active parents, she considers herself lucky to have worked with organizations like the Syrian American Council for quite a while. From contacting and meeting with local congressional representatives and media channels to administering a local Youth for Syria Facebook page, she understands the importance and impact of this organization's work. With experience at tech companies like Meta and Google and a large network of young professionals within the industry, she knows she can bring a different perspective to the Syrian American Council. She resides in San Francisco, California.

Reem Hariri Connor grew up in Damascus and is a graduate of Damascus University. Reem moved to Connecticut in 2002 as a graduate student at the University of Bridgeport. She currently works as a financial analyst for a technology company. She has been a passionate and consistent advocate for a free and democratic Syria since 2011. She is a member of both SAC and Mothers for Syria. She has participated in medical missions to the border, led clothing drives, and organized fundraisers for refugee families. Finally, Reem is a proud and active sponsor to several Syrian families.

Abdalmajid Katranji, MD is active with several local and national community service organizations.  For over 30 years, he has been active in serving the Muslim American community. He currently serves on the Boards of Impression 5 Children’s Museum, Carefree Medical and Dental, which provides medical care to underserved populations, the Ingham Regional Refugee Council, providing social services to refugee populations, and Emgage Action USA, a national advocacy organization for the Muslim American Community, Syrian American Council, and Atlantic Humanitarian Relief.  He has traveled the globe providing surgical services for humanitarian missions.  Active in several initiatives promoting interfaith dialogue and community-based action.  He is an experienced public speaker and has been interviewed and reported on by several media outlets such as CBS, US Arab Radio and Television, Deutsche Welle, and BBC World Service. He has had the honor of presenting at several conferences including at the United Nations, United States Institute for Peace, the European Union, Muslim Mental Health Conference, and the Global Conference on Muslim Studies sponsored by Michigan State University. He is the chairperson of Hama Foundation, Katranji Family Foundation, and The Syria Institute.

Dylan Connor lives in Connecticut with his Syrian wife Reem Hariri and their two children. He is a middle school Latin teacher, musician, and advocate for a free and democratic Syria. His original songs Feza Feza, Weary World, Idlib (The Revolution Lives), and If Only You’d Listen have brought awareness and solidarity to the Syrian crisis. Connor has also served as Chair of Missions for the Syrian American Council since 2018, leading missions to the Syrian border of Turkey and Jordan in direct response to mass displacement caused by the Assad regime and Russian war crimes. One of his songs was featured in the acclaimed film, “Little Gandhi.” He resides in Stratford, Connecticut.

Ahmed was born in Aleppo in 1953 and graduated from the University of Aleppo in 1977. From 1977 to 1980, he completed his residency in Aleppo (2 years) and Damascus (1 year). He did his military service from 1981 to 1983, and then a residency in CVMH, Johnstown, Pennsylvania from 1985 to 1987. He completed a fellowship in cardiovascular disease at the Christ Hospital in Chicago, Illinois from 1987 to 1990, and was at The Community Health Foundation from 1991 to 1993. From 1993 to now, he has been at the Charleston Heart Clinic of West Virginia. He also serves as a board member of Americans for a Free Syria and Kayla’s PAC and is a member of the Syrian American Council West Virginia Chapter. Dr. Sakkal has been involved in advocacy projects and organizations to bridge his community to the rest of the United States.  He resides in Charleston, West Virginia.

Osama is an activist and organizer who is passionate about making Syria a better place. With over 12 years of experience in business strategy, analytics, and operations in the tech sector, Osama has dedicated himself to bringing change and creating actionable solutions for his country.

Osama co-founded the Syrian Cultural House, which introduces the general public to Syria and its people. He has organized numerous events, protests, workshops, movie screenings, street festivals, and digital advocacy campaigns to bring people together in support of the Syrian cause; including campaigns for Aleppo, Ghouta, Daraa, Wadi Barada, and Idlib as well as campaigns for the Caesar Bill and for TPS for Syrians.

He also previously served as a consultant for the Syrian American Council.

Osama is a Fulbright Scholar and holds a Master’s in Business Administration (MBA) in Finance. He is currently employed as a Strategy Manager at a technology company, where he focuses on government, nonprofits, and health. He is also the founder of Aya Montessori, a private bilingual school in Maryland.

Osama currently resides in Washington, DC and continues to fight for a better future for Syria and the Syrian people.