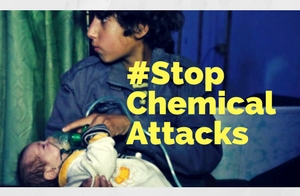 The Syrian American Council today calls upon President Trump and his national security team to formulate a definitive response to the latest chemical gas attacks perpetrated by the Assad regime on the Syrian people--crimes which defy previously-stated American policy and occur in violation of international law.
The February 1st Douma City and the February 4 Saraqib chlorine gas attacks constitute the third and fourth chemical gas attacks perpetrated by the Assad regime on the Syrian people in a single month. They occur amidst reports that the regime has "evolved" its chemical weapons program and in the aftermath of a Russian United Nations Security Council veto which ended the mandate of the Joint Investigative Mechanism (JIM), established to identify the perpetrators of chemical attacks in Syria.
Chemical weapons have been used repeatedly throughout the Syrian war; SAMS estimates at least 161 chemical weapons attacks through 2015. The use of chemical weapons has continued consistently since, making United States leadership on this matter an absolute necessity. In the past, such leadership has taken different military, political, and economic forms including the April 2017 strike on the Shairat Airbase--action taken by the Trump Administration in response to the Khan Sheikhoun chemical weapons massacre which enforced the red line initially articulated by former President Obama. As President Trump has stated: "It is in the vital national security interest of the United States to prevent and deter the spread and use of deadly chemical weapons."
The Syrian American Council iterates to President Trump the urgency of the situation. The lack of leadership among the international community in response to the commission of war crimes in Syria has allowed perpetrators to continue targeting innocent women, children, and men with impunity.
Share

Washington, DC (January 31, 2018)- Today, the Department of Homeland Security (DHS) announced that it is extending, but not redesignating Temporary Protected Status (TPS) for Syria. While we, as Syrian American organizations, are reassured by the extension which will allow Syrians with current-TPS status to remain inside the country, we are deeply disturbed by the failure of the Administration to redesignate TPS--a decision that will prevent nearly 2,000 non-TPS-holders already living in the United States from applying for TPS. This decision constitutes a break with practice, which has consistently seen both extension and redesignation every 18 months for TPS for Syria since the initial designation was made in March 2012. With the war in Syria ongoing, mass atrocities continuing, and humanitarian travesty overtaking the region, we, as Syrian American organizations, are extremely concerned that any premature repatriation of Syrians could be tantamount to a death sentence.

Syrian TPS holders include creative entrepreneurs, dedicated teachers, and hardworking employees who contribute to our country’s economy, strengthen our national fabric, and reflect positively on our diverse heritage. Syrian TPS holders are already present in the United States, are vetted regularly, and are subjected to extensive background checks. About 5,800 Syrian current-TPS holders are eligible for extension of TPS. About 2,000 Syrians living in the United States would be eligible to apply for TPS in the case of redesignation.

Since the war first began in Syria, more than 500,000 Syrians have been killed, at least 5.5 million Syrians have registered as refugees, and at least 6.1 million Syrians have been internally displaced from their homes. The State Department’s January 2018 travel advisory confirms: “No part of Syria is safe from violence.” Syrians forced to return prematurely to their country face a number of dire scenarios: becoming the target of barrel bombs, airstrikes, sieges, or chemical weapons attacks; being subjected to arbitrary arrest or forced conscription by Syrian authorities; or being unable to access the most basic necessities, including food, water, and medical care.

Until the disastrous human rights and humanitarian situation in Syria stabilizes; the ongoing war comes to a clear end; and the extraordinary circumstances at hand subside, the Syrian American organizations continue to call on this Administration to support policies like TPS which allow those fleeing unspeakable crimes and haunting scenes of war to temporarily seek refuge in a country that has built its national fabric from diversity, openness, and tolerance.

The Syrian American organizations referenced in this statement include:

Letter by +50 Groups on TPS for Syrians

At the end of January 2018, the Department of Homeland Security is set to make a decision on Temporary Protected Status (TPS) for Syria, a program that allows 6,900 Syrians to live and work legally in the United States.

Ahead of this decision, the Coalition for a Democratic Syria (of which the Syrian American Council is a member), the American Relief Coalition for Syria, and Americans for a Free Syria have been joined by over 50 human rights, immigration, advocacy, and faith groups and organizations in a coalition letter to the Department of Homeland Security and the Department of State calling for the extension and redesignation of TPS for Syria.

The letter explains: "The brutal war crimes and crimes against humanity, widespread arrests and repression, and starvation and medical deteriorations that Syrians inside the country are subjected to on a regular basis make the return of TPS beneficiaries untenable and tantamount to a death sentence."

A full text of the letter is available here.

This coalition letter occurs on the heels of a number of initiatives taken on by the Syrian American organizations and their allies on TPS, including but not limited to the submission of a legal petition to the Department of Homeland Security, congressional advocacy on TPS, grassroots education and awareness, and community and legal support for TPS-holders.

On Friday, January 19, 2018, a second letter calling for the extension and redesignation of TPS will be submitted to the Department of Homeland Security and the State Department by humanitarian organizations with operations on the ground.

The Syrian American Council condemns yesterday's deadly attack on civilians by the Syrian-Russian alliance that left 100 civilians dead and injured in the Atarib suburb of Aleppo. Two days ago, the State Department released a media note claiming that President Trump and Russian President Vladimir Putin “agreed there is no military solution to the conflict in Syria” during a meeting. Putin clearly only believes in a military solution for Syria and is implementing it on the ground everyday. Yesterday's massacre, which was the worst in the province since the Aleppo City Massacre of 2016, is proof that Putin is not a reliable or constructive partner in Syria. Putin has made clear that his government's aim is to keep Assad in power at the expense of Syria's civilians. Putin continues to protect, embolden, enable and support Assad's mass atrocities and crimes against humanity on the battlefield and at the UN Security Council. As such, the Syrian American Council calls on the Trump Administration to work with members of the Friends of Syria group of countries to protect civilians in Syria, end all sieges, release detainees, increase efforts to support a political transition away from Assad, and refer the Syria file to the ICC.

The Coalition for a Democratic Syria (CDS) decries the consideration of Mohammad Javad Zarif, Foreign Minister of the Islamic Republic of Iran, for the 2017 Nobel Peace Prize for his involvement in the international nuclear negotiations.

The Norwegian Nobel Committee has listed Foreign Minister Zarif and Federica Mogherini on its shortlist of nominees for this year’s Peace Prize for their involvement in negotiating the Joint Comprehensive Plan of Action, which was intended to limit Iran’s ability to produce a nuclear weapon.

The Syrian American Council condemns airstrikes by Russian and Assad forces on at least 4 different medical facilities in northern Syria on Tuesday, in flagrant violation of a “de-escalation zone.” The airstrikes included targeted attacks on a surgical hospital and civil defense center in Kafranbel town, the Rahma Hospital in Khan Sheikhoun town, and a maternity hospital in Tah town, with deaths reported among the maternity patients. All attacks were in flagrant violation of a Russian-declared “de-escalation zone” in Idlib and northern Hama meant to reduce civilian casualties.

Posted by Lena Tanya Arkawi · September 15, 2017 9:49 PM
The Syrian American Council demands that the U.S-backed coalition against ISIS investigate yesterday’s reported massacre on a refugee camp near Jadid Akaidat village southwest of Deir Ezzor City. According to the Syrian Observatory for Human Rights, the strike killed 24 civilians, including 13 children, and was most likely carried out by the U.S-led coalition. Over 50 civilians were killed in Deir Ezzor Province on Thursday by Russian and U.S.-led forces in a dramatic uptick in civilian casualties.

Posted by Lena Tanya Arkawi · September 09, 2017 10:57 AM
The Syrian American Council calls upon Staffan de Mistura, the United Nations Envoy to Syria, to resign from his post after his statement Wednesday that peace in Syria depends on if the opposition could “realize it did not win the war.” De Mistura’s comment wrongly implies that the opposition wants total victory and that this is the main obstacle for peace. Coming one day after a UN probe affirmed that Assad perpetrated the April 2017 Sarin attacks, de Mistura’s remarks also betray a lack of self-awareness toward his own failures.
Read more
Share

The Syrian American Council condemns the brutal killing of seven members of the Syrian Civil Defense group known as the White Helmets. The cold-blooded attack took place last Saturday at the White Helmet's center in Sarmin, Idlib. The senseless murders were carried out by unidentified gunmen. 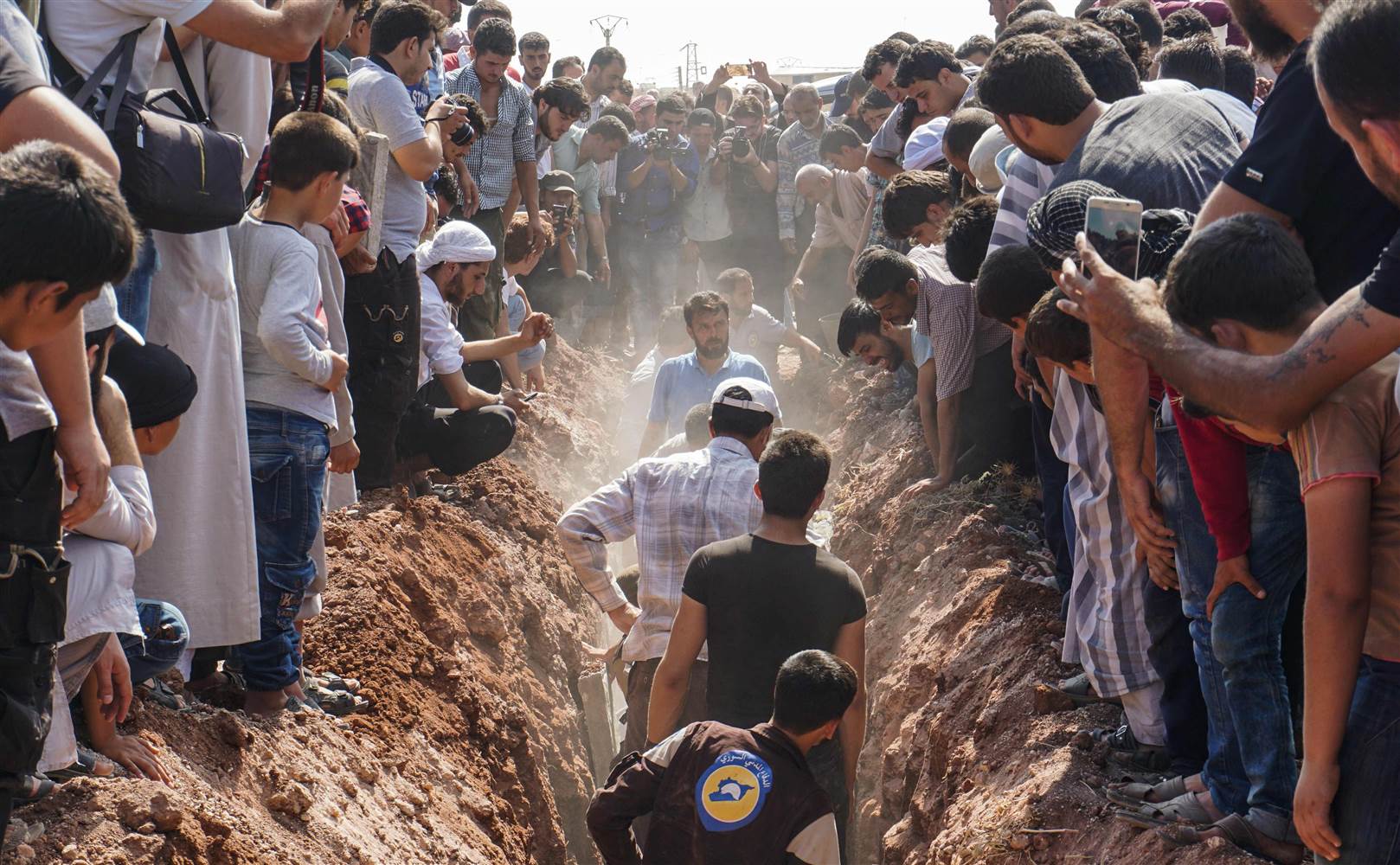