We need you to contact your Congressional member today and urge them to support Syrian refugees by co-signing New Jersey Representative Tom Malinowski's letter to the Biden administration. The letter urges the administration to accelerate the resettlement of the 29,000 Syrian refugees in the pipeline of approval by the State Department.

On August 21st, light a candle for the people of Ghouta 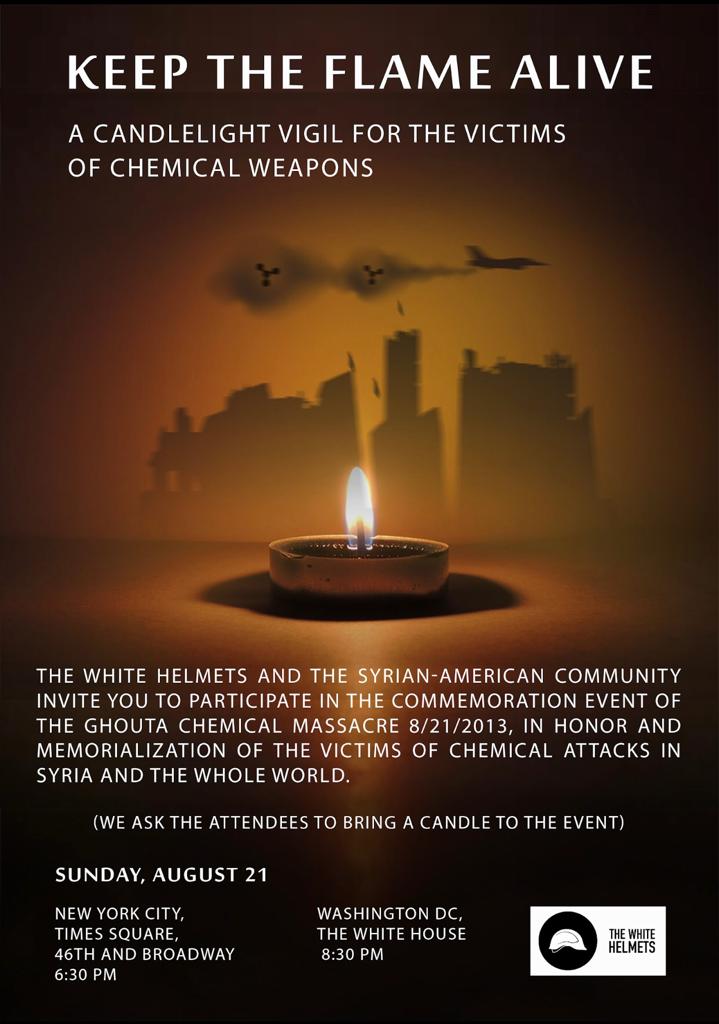 The Syrian conflict, which began with peaceful and popular protests by Syrian civilians calling for change, freedom, and human rights, and which was met with a brutal crackdown by the Assad regime, has extended into its 12th year. Eight years ago, on the early morning of August 21, 2013, the Assad regime released the nerve agent sarin on its own people in the Ghouta district of Damascus, killing more than 1,461 Syrians, many of them children. It is estimated that the Assad regime has used chemical weapons against the Syrian people at least 50 times since the conflict began. On this somber anniversary, we remember and honor all the victims of the Assad regime’s chemical weapons attacks.

On August 21, the 9th anniversary of the Ghouta chemical weapons massacre, the American Coalition for Syria is joining with the White Helmets to honor and memorialize the victims in Ghouta and all victims of chemical attacks around the world and spread a message of solidarity.

Our ask for you:

We are hosting candlelight vigils across the globe, including New York City, The Hague, Amsterdam, Denmark, and Montreal. Please join us at one of the vigils listed below. If your city is not listed, please contact us at [email protected] so that we can help you plan a vigil.

If you cannot attend an in-person vigil, please hold a vigil in your house, and share a picture on social media with the hashtag #KeepTheFlameAlive. 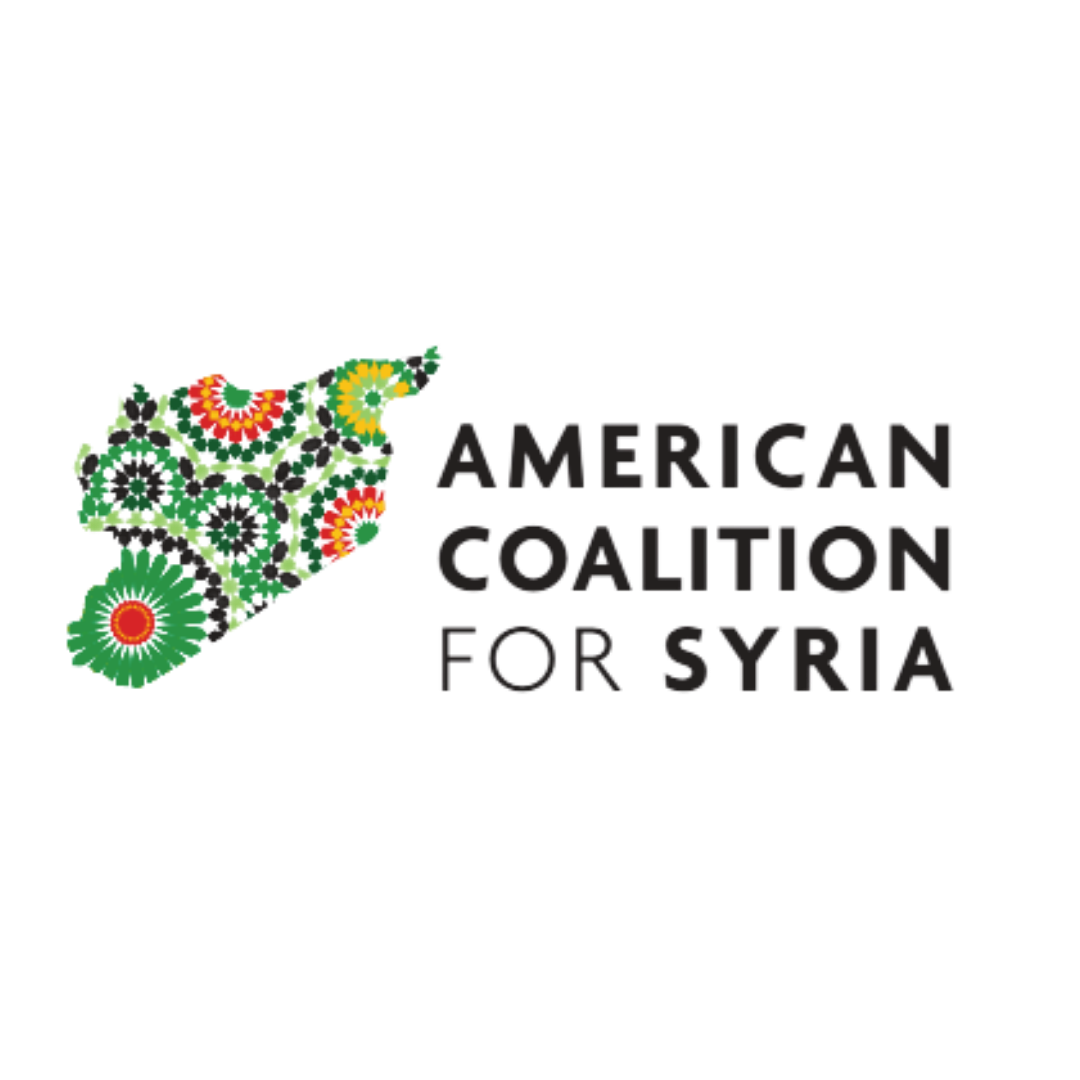 The American Coalition for Syria (ACS), a diverse and multi-faith initiative that supports a free and democratic Syria, stands in solidarity with the people of Ukraine. Russia’s invasion of Ukraine has awakened the world to the destructive consequences of failing to hold President Vladimir Putin accountable for his war crimes and other atrocities in Syria. The bombing of hospitals and schools, displacement of millions of refugees, denying humanitarian access, and the use of prohibited weapons were the hallmark of Russia’s brutal campaign in Syria before employing them in Ukraine. With efforts underway to punish Putin for his actions in Ukraine, it is time for the United States to transition away from its dependency on Russia in Syria.

Re-energize Coordination with Allies on Syria

Over 30 percent of Syria’s territory and seven million Syrians are outside of the control of Assad in northwest and northeast Syria. The United States should work with Turkey and other international partners to coordinate economic, security, and political support that does not depend on Russian cooperation to the pro-democracy movement in Syria which includes Arabs, Kurds, and Assyrians among others.

The U.S. should increase humanitarian and stabilization funding to liberated communities, including the northwest where in Idlib there are over three million people who need aid, especially in the health and education sectors.

The Biden administration should immediately begin resettlement of the 29,000 individuals who have been screened by the United Nations Refugee Agency and are ready for resettlement.

In 2019, the Caesar Syria Civilian Protection Act was signed into law. The Caesar Act allows the U.S. to work diligently to implement robust new sanctions against the Assad regime and its supporters, particularly Russia and Iran. These financial tools should be implemented as part of a comprehensive strategy to deny the regime and Russia the means to continue their abuses. This should also include increased oversight of U.S. funding of the UN Syria humanitarian relief effort to ensure that U.S. money for aid does not line Assad or Putin’s pockets.

Assad has transformed Syria into a narco-state in which drug traffickers produce and distribute massive amounts of the illicit drug Captagon. This has netted the regime an estimated $5 billion in revenues, allowing Assad to evade sanctions. The illicit drug business has caused major problems for neighboring countries and has reached Europe, Asia, and Africa. If left unchecked, it may eventually make its way to the United States.

The Syrian government withholds vital humanitarian aid to areas outside its control and uses the aid system to surveil and control people in areas over which it has reestablished its rule. This has and will continue to deepen the deprivation and oppression that fueled the revolution, prolonging instability far into the future. International donors seeking to support Syria’s recovery need to address the Assad regime’s systematic manipulation of the aid system.

The American Coalition for Syria is happy to provide you with further information on any of these issues upon request. You can contact us at [email protected]

WASHINGTON D.C., December 14, 2021 – The Syrian American Council calls upon the Biden administration to turn its attention and efforts to immediately help the tens of thousands of residents of Rukban in southern Syria obtain life-saving humanitarian aid. President Biden’s administration has been characterized by strong rebukes of human rights violators — from denouncing China’s treatment of the Uyghurs to standing up to Russian President Vladimir Putin’s malign actions in Ukraine — and should continue this trend of global leadership by standing up for the people of Syria who have suffered under years of violence by the Assad regime and its Russian backers.

WASHINGTON D.C., November 3, 2021 –  On October 22, 2021, leaders from nine Syrian American organizations gathered in Washington, D.C. to usher in the next era of strategic cooperation for a free and democratic Syria. Leaders of Americans for Free Syria, Free Syria PAC, Kayla’s List PAC, Pro-Justice, Syria Faith Initiative, Syrian American Council, Syrian Christians for Peace, Syrian Emergency Task Force, and Syrian Forum had a full day of discussions and deliberative about the current challenges and how to better coordinate a more effective strategy on Syria advocacy. The deliberation ended by signing a document that organized future coordination, strategy, and decision-making.

WASHINGTON, D.C., October 5, 2021 - On October 3rd, 2021, the Jordanian King Abdullah II received a phone call from Bashar al-Assad, leader of the Syrian regime responsible for torturing, killing, arbitrarily detaining, and displacing countless innocent civilians since the start of the peaceful uprising of the Syrian revolution in 2011. The undersigned organizations strongly reject and denounce the actions by the Kingdom of Jordan to normalize relations with the Assad regime, turning a blind eye to genocidal massacres against the civilians of their sister nation.

Syrian TPS Holders, Including Doctors, Days Away from Losing Jobs Due to USCIS Delays

SYRIAN TPS HOLDERS, INCLUDING DOCTORS, DAYS AWAY FROM LOSING JOBS DUE TO USCIS DELAYS
USCIS must issue an automatic extension for work permits before the deadline

Washington, DC—Work permits for Syrian Temporary Protected Status, or TPS, holders are set to expire on September 27th, just days away. Yet many who properly applied months ago to renew their work permits have not received their new documents from the U.S. Citizenship and Immigration Services (USCIS). This is not the first time USCIS delays have threatened the livelihood of TPS holders, as thousands risked losing their permission to work due to severe delays under the previous administration, including those from Syria. Now the Biden administration is poised to repeat the same failure with Syrian TPS holders once again.

The attacks on the birthplace of the revolution should be met with international condemnation and action towards a political transition.

WASHINGTON D.C., July 30, 2021 –  The undersigned organizations mourn the victims of the latest Assad regime and Iranian militias offense on civilians in Daraa in southwestern Syria on the border with Jordan. Since late June, Syrian forces have besieged the civilians of Daraa, in violation of the reconciliation agreement brokered by Russia in 2018. The humanitarian organization the White Helmets reported that 18 civilians were massacred in Alyadouda town just today. The undersigned organizations demand that Russia and its client state abide by the agreement and that the United States lead an international effort to prevent the regime and its backers from slaughtering more civilians.

This week’s Syrian elections are the latest example by Syrian dictator Bashar al-Assad of a trend of a lack of free and fair democracy.

WASHINGTON D.C., April 23, 2021 – A coalition of Syrian American organizations denounces the latest round of elections in Syria and makes clear that the elections are part of a fraudulent and illegitimate electoral process that is neither free nor fair. The elections are outside of the framework of transparency and accountability described in United Nations Security Council Resolution 2254 and do not include the voices of all Syrians, especially refugees, internally displaced Syrians, and those in the diaspora.

WASHINGTON D.C., April 23, 2021 –  Today, the Syrian American Council and Americans for a Free Syria applaud the members of the Organization for the Prohibition of Chemical Weapons (OPCW) who voted to strip the Assad regime of its rights and privileges due to the repeated, ongoing use of chemical weapons against civilians in Syria. Though this decision represents an important first step towards accountability, it remains critical that such a largely symbolic motion by the chemical weapon watchdog should be followed by a referral to the United Nations General Assembly for further accountability actions.