We've attacked Bashar Assad, and yet no 'World War III'

President Trump ordered a Tomahawk missile barrage against Bashar Assad's forces in retaliation for the Syrian nerve gas massacre of April 2017. The White House threatened to repeat this action just last week based on intelligence of an imminent chemical attack. Trump's attacks against Assad have left in smoldering ruins years of Obama administration talking points about action against Assad triggering "World War III." 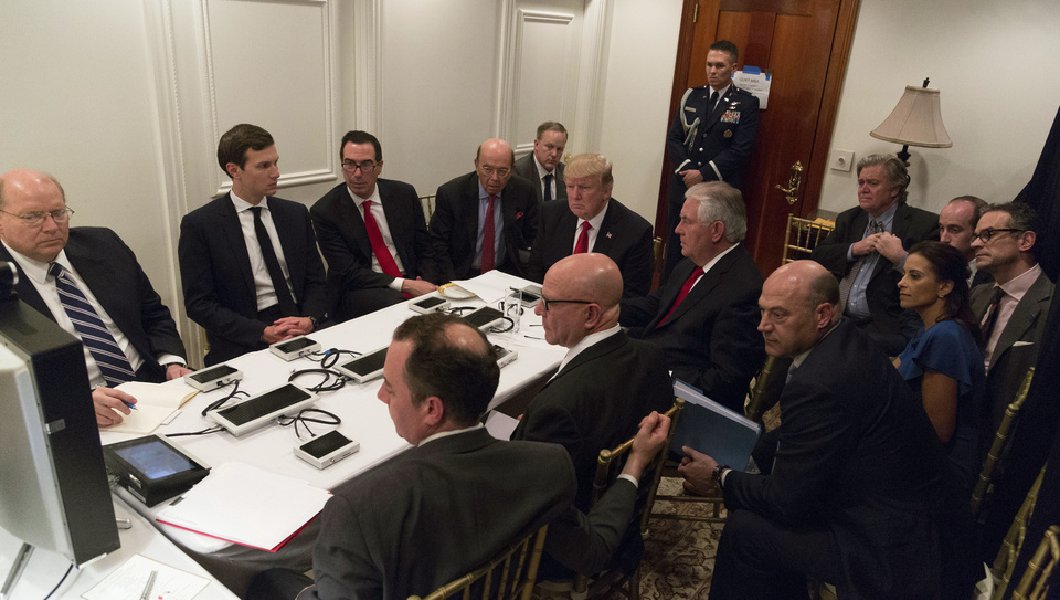 In the last years of the Obama presidency, administration officials waved off any and all of my suggestions to build Syrian opposition leverage and coerce Assad into negotiating. They warned that such suggestions – even humanitarian airdrops – could trigger World War III with Russia, the most important backer of the Assad regime.

But since April, America has continued to hit pro-regime forces and their Iran-supported allies in Syria, targeting multiple Iran-backed columns and Iran-supplied drones that threatened a U.S. training base for Free Syrian Army rebel fighters. When the U.S. shot down a regime plane in air-to-air combat last week, it was the first event of its kind since the 1990s war in Kosovo.

With these moves, the U.S. has managed to deter regime chemical attacks on civilians – something former President Barack Obama failed to do through diplomacy – and repel Iranian aggressions against U.S. assets without triggering World War III. Yet, former Obama administration officials are doubling down.

Colin Kahl, who advised Vice President Joe Biden on national security, writes on Twitter that America is on the path to a "possible clash with Russia" and "war with Iran." And a former Obama administration Iran team member, Ilan Goldenberg, warned in an op-ed that more aggressive policies could lead the U.S. to "stumble into a devastating conflict" in Syria.

Last week, with regime warplanes bombing Pentagon partners fighting Islamic State near the group's capital of Raqqah, Trump responded as Obama should have much earlier when Syria's regime attacked our allies who were fighting ISIS: by shooting down Assad's planes.

Had Obama taken that same step in 2014, ISIS might have been defeated before declaring a Caliphate. Dozens of ISIS terror attacks in Manchester, Orlando, Paris, Brussels, Berlin and elsewhere that were inspired by ISIS's rise most likely would not have happened. We are already in a "devastating conflict" due to Obama's inaction.

And before policymakers heed Kahl's pleas to avoid a "possible clash with Russia," they should reflect on how such a clash became possible. There was no risk of a clash with Russia in mid-2015, when Turkey presented former U.S. anti-ISIS tsar John Allen with a proposed "safe zone" in northern Syria and earned his support. Russian forces had not yet entered Syria then – and based on my own diplomatic sources, Russian diplomats were spooked by the discussions. But Russia was emboldened when the U.S. nixed the proposal in late July. One month later, Russia signed a secret pact with Assad to enter the war.

My intent is not to argue that military action against Assad is a simple matter; it never was. Rather, I think the record shows that failure to confront Assad and his backers has caused far more complications than military action would have. And I believe that this still holds true today.

Debate is raging within the Trump administration over how far to go in support of U.S. partners, particularly the anti-ISIS Free Syrian Army rebels, supported by a Pentagon training base near the Jordanian border. On the one side, key National Security Council officials favor offensive action against Iran-backed militias near the base. On the other side, multiple military officials favor a continued focus purely on ISIS. Army Col. Ryan Dillon said Friday that "if it looks like [pro-Assad forces] are making a concerted effort to move into ISIS-held areas ... then that is not a bad sign."

The problem with a pure anti-ISIS focus is that Iran is exploiting the ISIS fight to damage U.S. interests. Two weeks ago, regime forces evicted ISIS from a narrow strip of territory northeast of the Pentagon's training base. Their purpose was not to launch a new offensive against ISIS, but to box in U.S.-backed rebels and prevent them from fighting ISIS further east. The regime has also attacked U.S.-backed groups directly, and seized a major position from Pentagon-backed rebels last week.

The U.S. cannot stand by in the face of such attacks, which have an end goal of conquering eastern Syria "before the Americans get there." The aim is to restore Iran's land corridor to the Mediterranean, by which (among other things) weapons are shipped to Hezbollah in Lebanon.

Gains against ISIS by U.S.-backed forces, and particularly Free Syrian Army forces at the Pentagon base, are the main potential obstacle to this corridor. So while ongoing attacks against Iran-backed forces are laudable, they are not enough. The U.S. can and should preempt Iran-backed advances by empowering FSA forces to enter major eastern Syrian population centers. Most FSA fighters at the base are from eastern Syria and would be welcomed by locals.

In the long run, Trump needs to construct a coherent policy framework that leverages his newfound assertiveness to help negotiate the removal of Assad, whom Trump called an "animal" after the April chemical strikes. A major offensive against ISIS in the east should only be the first step – and it is the first of many that Trump can take in Syria without triggering World War III.

Mohammed Alaa Ghanem is the director of government relations and a senior political adviser at the Syrian American Council and a former professor at the University of Damascus, Syria.