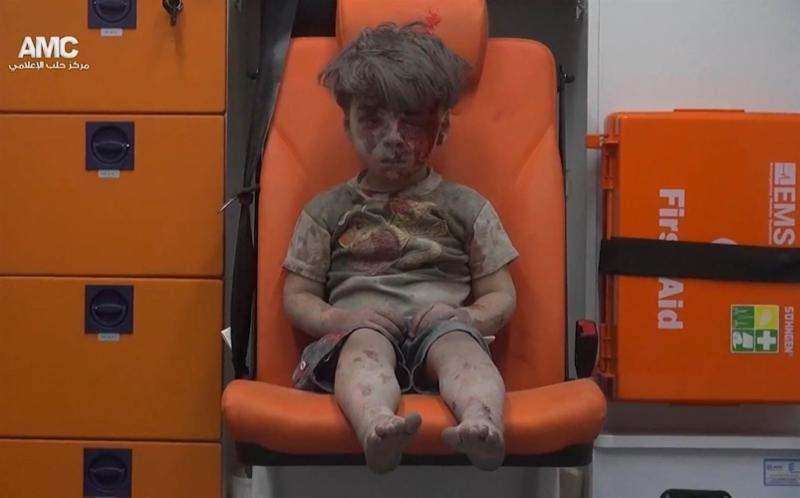 The Syrian American community is outraged by the complete lack of response by President Obama to Russia's war crimes.  In the past five years the President's inaction has only emboldened the Assad regime and its backers Russia and Iran.

Omran Daqneesh, a 5 year old child who emerged from the rubble following a Russian airstrike, has shocked the world.  The image again makes clear that Russia continues its barbaric campaign against Syrian civilians including innocent children. On Tuesday night Russian warplanes supporting the Assad regime struck the Rayh and Mursala hospital and destroyed all medical equipment leaving 400,000 people in northern Syria without medical care.

A recent report by Human Rights Watch also documented increased use of incendiary weapons that caused excruciating burns by Russian warplanes. The Syrian Network for Human Rights noted this week that Russia has surpassed ISIS in the total number of civilians it has killed even though ISIS had been carrying out attacks for two and a half years before Russia intervened.

The Syrian American Council urges everyone to speak up and take action.


Click here to send President Obama a letter asking him to stop the atrocities now.


The letter to President Obama is below:


Dear President Obama,
We write you as friends and supporters of the Syrian people and people of conscience. We have seen friends and family bombed, sniped, and tortured to death; watched in horror as tanks were deployed against protesters in our old neighborhoods; and, in some cases, placed our own lives at risk to enter Syria and treat the victims of Assad's criminal war against his own people.  We demand a stronger response from you in response to the recent uptick in violence against civilians and medical facilities, especially since these attacks now include Russian airstrikes from Iranian bases.

Iran has not allowed a foreign military to launch attacks from its soil since World War Two -- but on Tuesday, Russian warplanes took off from Hamadan Airbase in western Iran and carried out multiple airstrikes inside Syrian territory. Russia claims that these strikes were directed against "terrorist" or "militant" targets; in truth, as has been well-documented by international human rights organizations and acknowledged by our own administration, the main targets of Russian air raids are civilians.

Tuesday night brought a sampling of what can be expected from Russia and Iran's new arrangement: Russian warplanes carried out five targeted airstrikes on Reeh al-Mursula Hospital, destroying the roof, walls, medical equipment, and emergency vehicles and leaving 400,000 people in northern Syria without medical care. A report released by Human Rights Watch on Tuesday also highlighted the increased Russian usage of incendiary munitions, which trigger extremely intense fires that cause excruciating burns. The report documented at least 18 incendiary strikes by Russia since June.

Russia's use of incendiary weapons are a direct violation of Protocol III of the Convention on Chemical Weapons, which prohibits the use of such weapons on civilian population centers. Russian bombing raids on Syria from Iran are also a possible violation of United Nations Security Council 2231, which forbids any transfer of combat aircraft to Iran without U.N. Security Council permission. Russia's flagrant attacks on civilians in blatant violation of international law can not go unanswered, and we demand that you act promptly and urgently to put an end to these outrages.
Sincerely,
Concerned Citizens
Connect with Facebook
Connect with Twitter
Earthquake Crisis Response Subscribe to Email Digest Signup Safe Zone #SpeakToSyrians