Last week, we sent you an e-mail to take action and call the House to Sanction Russia and Iran. Tomorrow, we are asking for your support to Tweet! On Tuesday, July 18th from 9 AM to 8 PM EST, we will be tweeting to get more U.S. citizens to urge their representatives to pass the Countering Iran's Destabilizing Activities Act of 2017 bill, which will sanction Russia and Iran for their destabilizing activities and acts of aggression.

This is especially important not only because of Russia's aggression today in Syria, the Ukraine, and other countries but today marks the third anniversary of the shoot-down of Malaysia Airlines Flight 17 (MH17), brought down by pro-Russian forces in Ukraine. Russia needs to be held accountable for its crimes from Ukraine to Syria!

Be the one who stands up against Putin and his regime tomorrow by using Twitter, or by emailing your representative at this link. Please read below for further details. 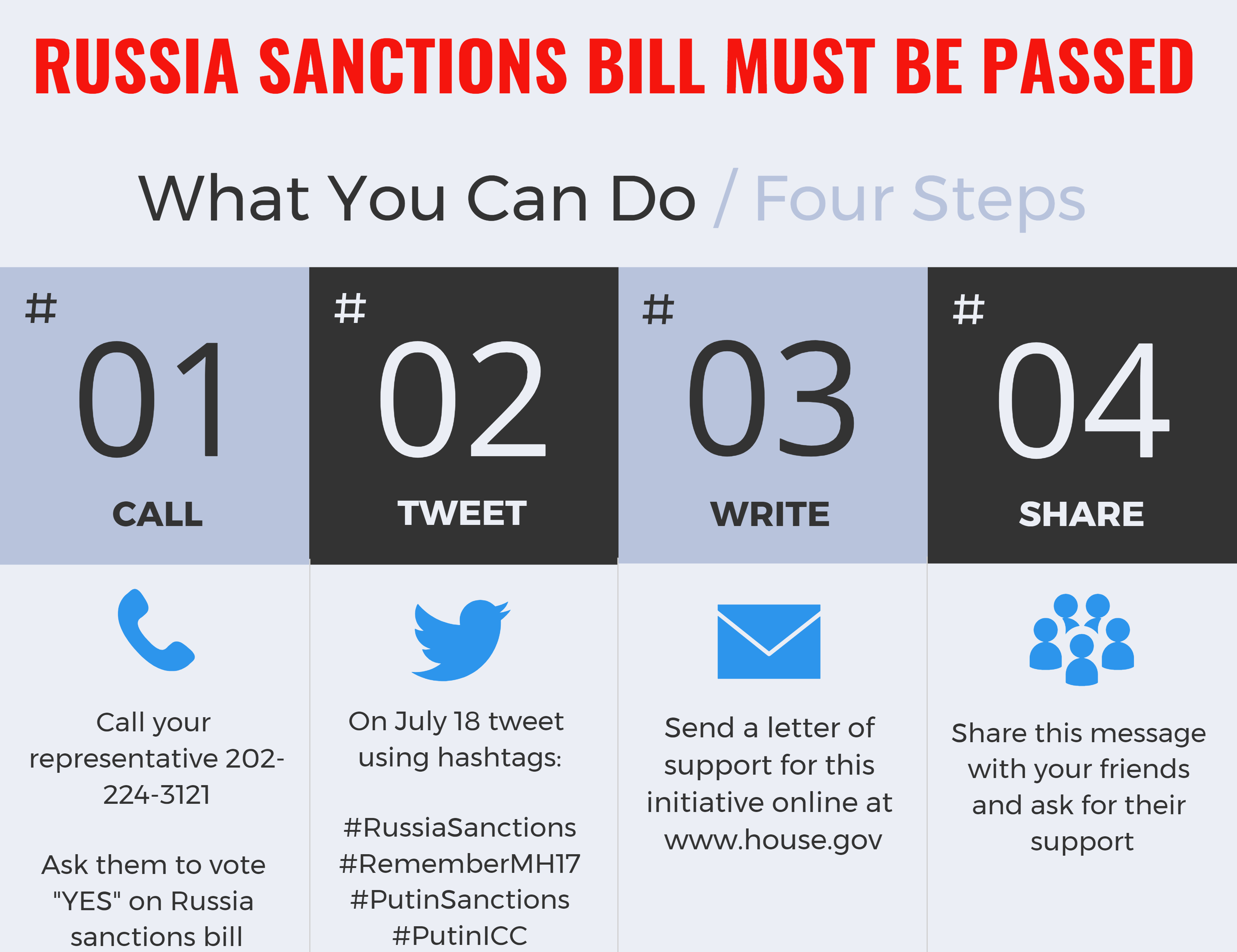 Support the Russia sanctions bill by joining our Twitter storm on Tuesday, July 18th, 2017!
The Putin regime has demonstrated continued aggression in its foreign policy over the past three years in its military action in Ukraine and Syria and has still not acknowledged its illegal annexation of Crimea. Furthermore, this Mondaywill signify the third anniversary of the shoot-down of Malaysia Airlines Flight 17 (MH17), brought down by pro-Russian forces in Ukraine on July 17, 2014. 283 passengers and 15 crewmembers were killed in this murderous act. It’s been three years, but Russia’s president Vladimir Putin has not admitted this massacre either.
Along with these actions in Ukraine, and Russia’s assault against Syrian civilians, Russia thwarts democracy in the Western Balkans, exhibits military aggression against Georgia and occupied Georgian territories and has most actively interfered in elections in Montenegro, the United States, and France through cyber-attacks.
Despite efforts by the West to condemn Russia’s aggression, their foreign policy remains unchanged. Therefore, it is imperative that U.S. legislators pass S. 722, “Countering Iran’s Destabilizing Activities Act of 2017,” a bill that sanctions Russia and Iran for their destabilizing activities and acts of aggression. To spread the word to fellow U.S. citizens and those not indifferent to Russia’s aggressive actions, please join together in this Twitter storm to raise awareness, remember the downing of MH17, and ask fellow U.S. citizens to urge their representatives to pass this bill!
This Twitter storm is being organized by a growing coalition of concerned organizations and citizens, including the Advisory Council for Bosnia and Herzegovina, Americans for a Free Syria, Belarusan-American Association, Coalition for a Democratic Syria, Circassian Cultural Institute, Free Russia Foundation, Georgian Association, Joint Baltic American National Committee, Magnitsky Act Initiative, Free Russia Foundation, Ukrainian Congress Committee of America, United Macedonian Diaspora, World Congress of Crimean Tatars USA.
How it happens? On July 18, we’ll show our support to Russia sanctions bill and remember the MH17 flight, that was shot down three years ago. We’ll be tweeting on these two topics using hashtags such as #RussiaSanctions #RussiaSanctionsBill #MH17 #Russianaggression.
Sample tweets that you can use:
1.    Continue implementation of #RussiaSanctions to stop #RussianAggression
2.    #RememberMH17
3.    Support the #RussiaSanctionsBill
4.    #MH17 attack was #massmurder #PutinSanctions #PutinICC
5.    Calls & Messages Needed TODAY! U.S. must apply #RussiaSanctions
6.    Contact your Rep about #RussiaSanctionsBill  http://www.house.gov/representatives/find
We’ll provide a list of key congressional and committee Twitter handles to copy, which will include Leadership.
When it happens? We’ll start tweeting about #RussiaSanctions #RussiaSanctionsBill and #MH17 at 9AM(Eastern Time Zone in the U.S.), tweet all day to support the Russia sanctions bill and to pay respect to all those, killed three years ago. We’ll conclude at around 8PM.
Why should you join? Many Twitter storms make news stories if we can get enough people are involved. Because it’s very important to pass the Russia sanctions bill to show American support for Eastern European countries and stand its ground for democratic values, it’s important to raise awareness of Moscow’s continued aggressive foreign policy. 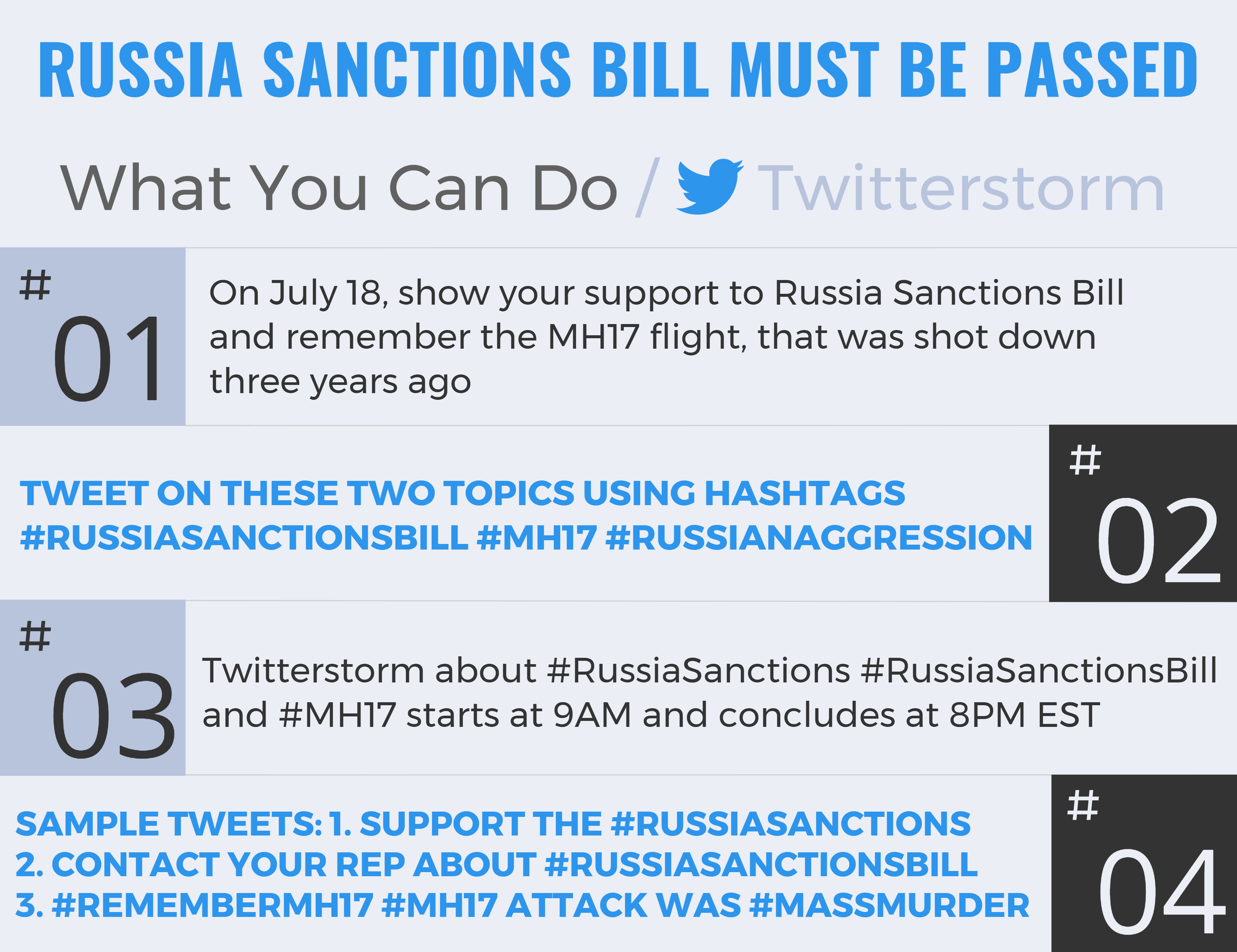