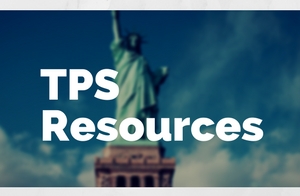 The Syrian American Council has been working closely with fellow Syrian-American organizations, as well as a broad and remarkable group of human rights, immigration, advocacy, legal, and faith groups to advocate for the extension and redesignation of Temporary Protected Status (TPS) for Syria ahead of the administration's expected decision on this life-saving program by the end of January 2018.

Groups across the spectrum have worked tirelessly to produce coalition letters, advocacy reports, legal petitions and more. What follows is an attempt to gather all of these resources in a central location:

Legal Petition & Addendum to DHS submitted by Syrian-American organizations: not made publicly available

"No Safety in a Warzone: Why TPS is Needed for Syria" by CLINIC

Profiles of Syrian TPS-Holders by Oxfam

Arab News:"Syrians in the US fear deportation if 'protected status' is removed"

Middle East Eye: "Syrians in US fear Trump may end their 'protected status'"

NPR: "Nearly 7,000 Syrians Are Waiting to See If Their Protected Status Will Be Renewed"

The Intercept: "Trump Administration Weighs Whether to Extend Protections for Thousands of Syrians"

The National: "6,900 Syrians in the US face risk of deportation if Trump ends protection"

Washington Post Op-Ed by Robert Ford and Wa'el Alzayat: "A plea to President Trump: Don't send Syrians back to Assad"